On 9th May, Vinseum in Vilafranca del Penedès hosted the Regenerative Viticulture Conference for the second year in a row. The conference series is aimed at recovering this particular way of understanding and working the land — which brings soils back to life and realigns the relationship between plants, animals, and humans — in order to familiarize winegrowers and winemakers with the approach so that they may implement it for the good of the vineyards and the planet. 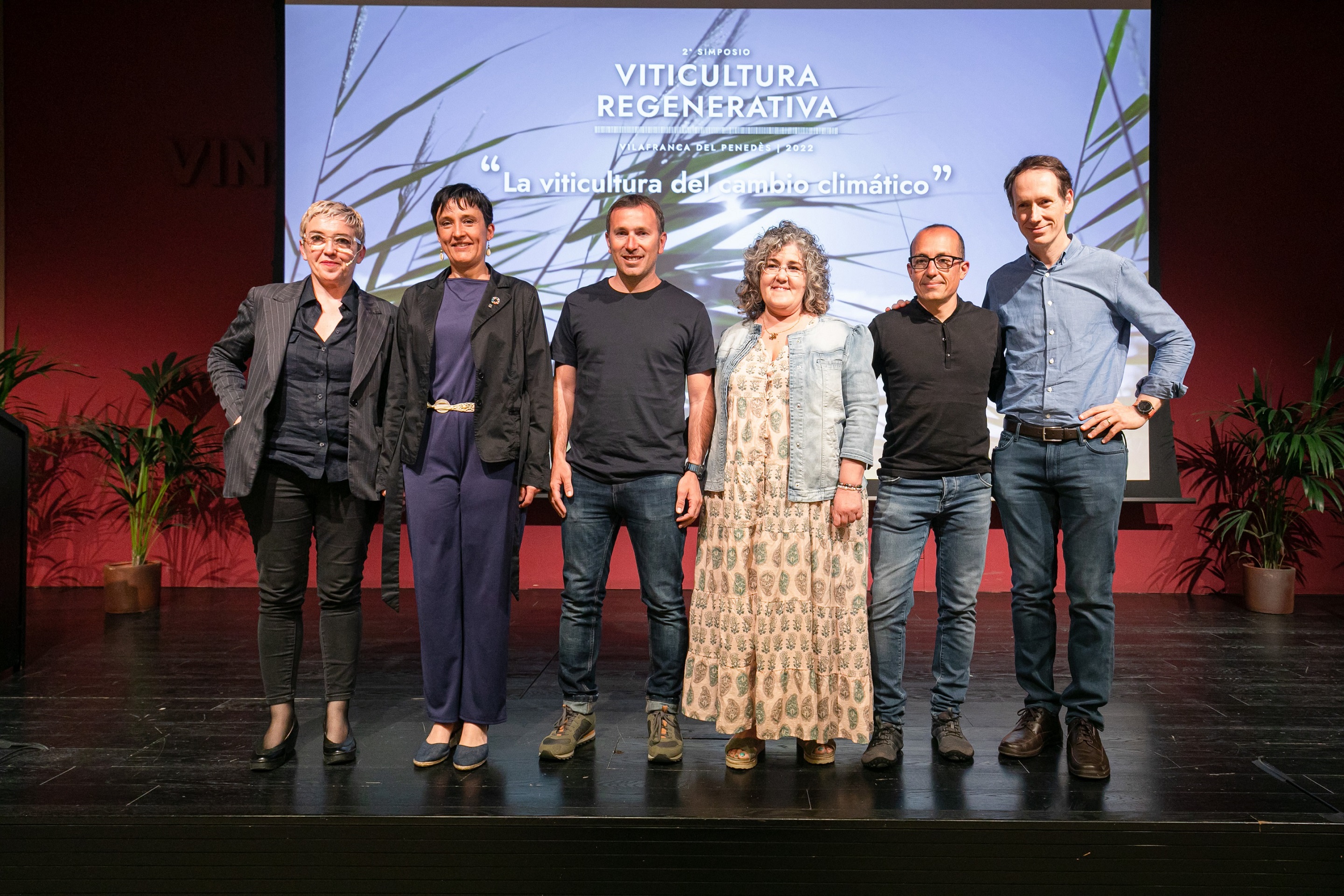 What is regenerative viticulture?

At the centre of the regenerative viticulture model is the recovery of the soil’s natural fertility; nourishing the food chain, increasing organic matter, improving the water cycle, and sequestering carbon. All the while it seeks to establish a balance between organic matter, minerals, and microorganisms.

At the conference, Miguel Torres Maczassek, general manager of Familia Torres and president of the Regenerative Viticulture Association, announced the launch (scheduled for July) of an international regenerative viticulture certification programme: the Regenerative Viticulture Alliance (RVA). Miguel Torres defined this as a “first step”, an effort at establishing the criteria required for certification, as well as providing recommendations for cultivation practices, assistance in carrying out self-assessments, and external audits of the levels of organic matter, carbon sequestration, and biodiversity.

Key statements  at the conference

Below we have compiled a selection of highlights and the most significant statements made by the various speakers during the event:

North American farmer Joel Salatin gave the inaugural address, sharing the guidelines implemented at Polyface Farm, an example of regeneration and natural symbiosis. For 60 years, Salatin has produced high-quality foods and regenerated the fertility of cropland which had been deteriorated by its previous use. In this approach, both crops and animals participate in a relationship that benefits all. 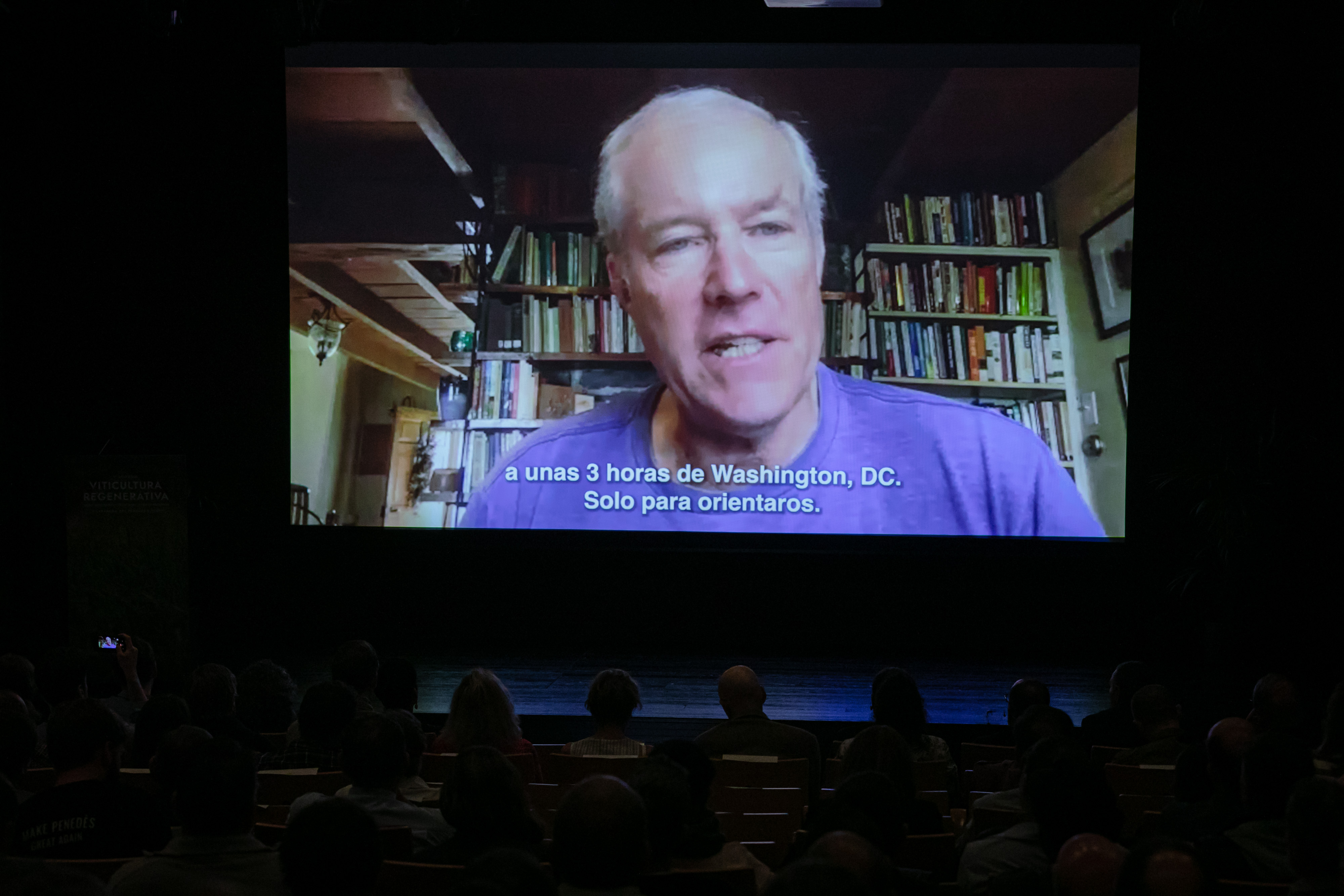 Joel Salatin during his presentation at the second Regenerative Viticulture Conference.

“The shift to regenerative agriculture is very necessary. Given the problem of soil depletion, regenerating the soils is a must.” Joe Salatin,  Polyface Farm

“The soil is the basis; it is where minerals, organic matter, and microbiology interact and make the ecosystem efficient and resilient. This cycle of decomposition and recomposition enriches the earth, nourishes plants, and generates a greater capacity to hold water and store carbon.” Josep Ramon Sainz de la Maza, regenerative agriculture consultant.

“We have to unlearn in order to relearn and apply the knowledge which nature has given us over the course of billions of years.” Dania García, PhD in Molecular Biology, Universitat Rovira i Virgili 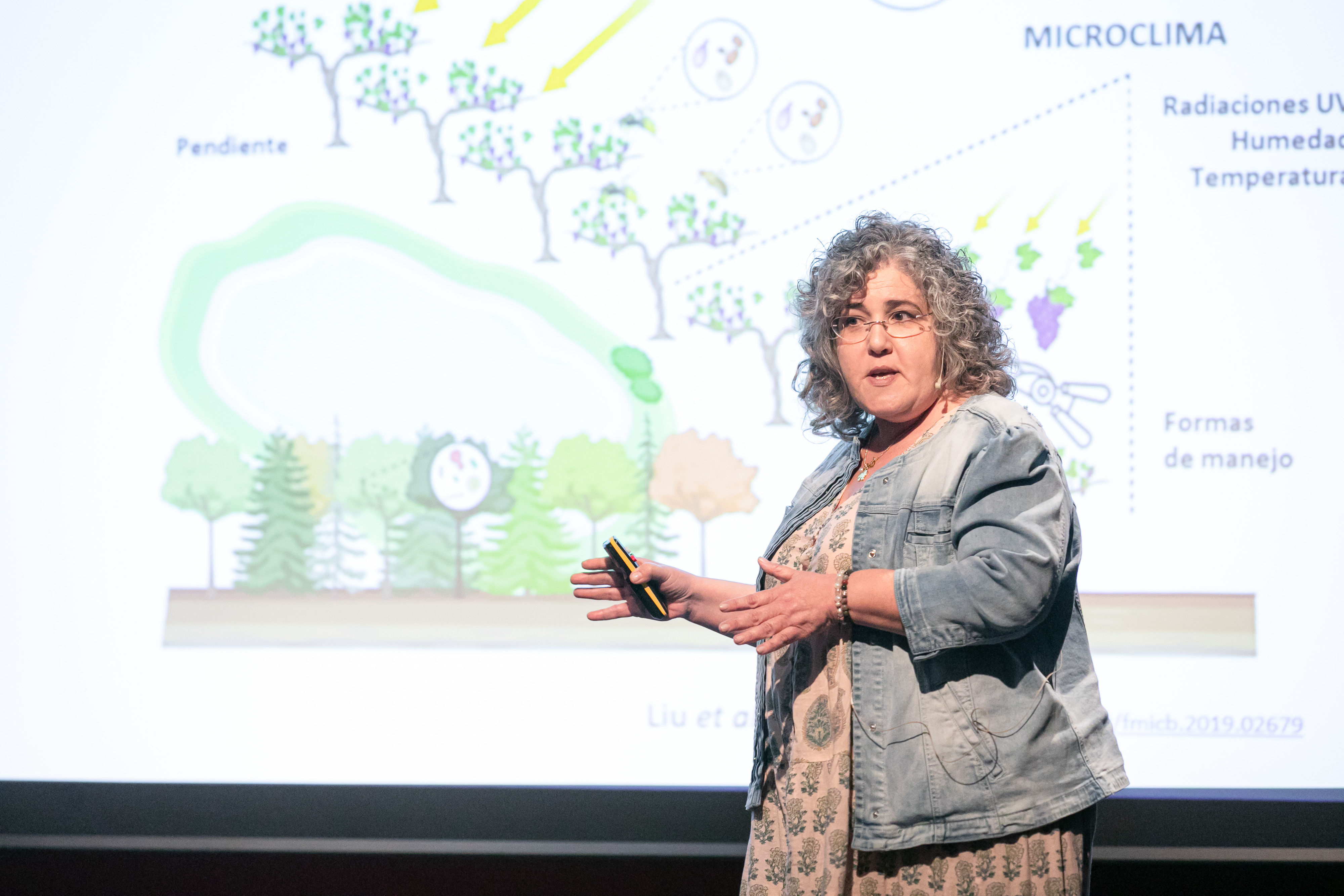 Dania García during her presentation at the second Regenerative Viticulture Conference

“Farming with nature, not against it, is a change that requires a reeducation on our part. As a significant contributor to global warming, the agricultural sector cannot wake up every day and make things worse. You can be part of the problem or part of the solution.” Johan Reyneke, South African winegrower

Reyneke’s most striking example pertained to water: since he began working regeneratively, his soils have improved significantly, and his water needs are now half of what they used to be in 2000. Thanks to cover crops in the vineyards and no tillage, the soils retain more water, thereby reducing erosion.

“Consumers are moving away from luxury and towards brands with integrity, and the combination of all of that could be the future of the industry.” Johan Reyneke

“Cover crops create microclimates, improve soil health, and eliminate erosion, a very serious problem that results in the loss of 15 tonnes of earth per hectare and year in Spain. We have to turn the soil into a sponge.” Manel Badia,  expert in keyline design 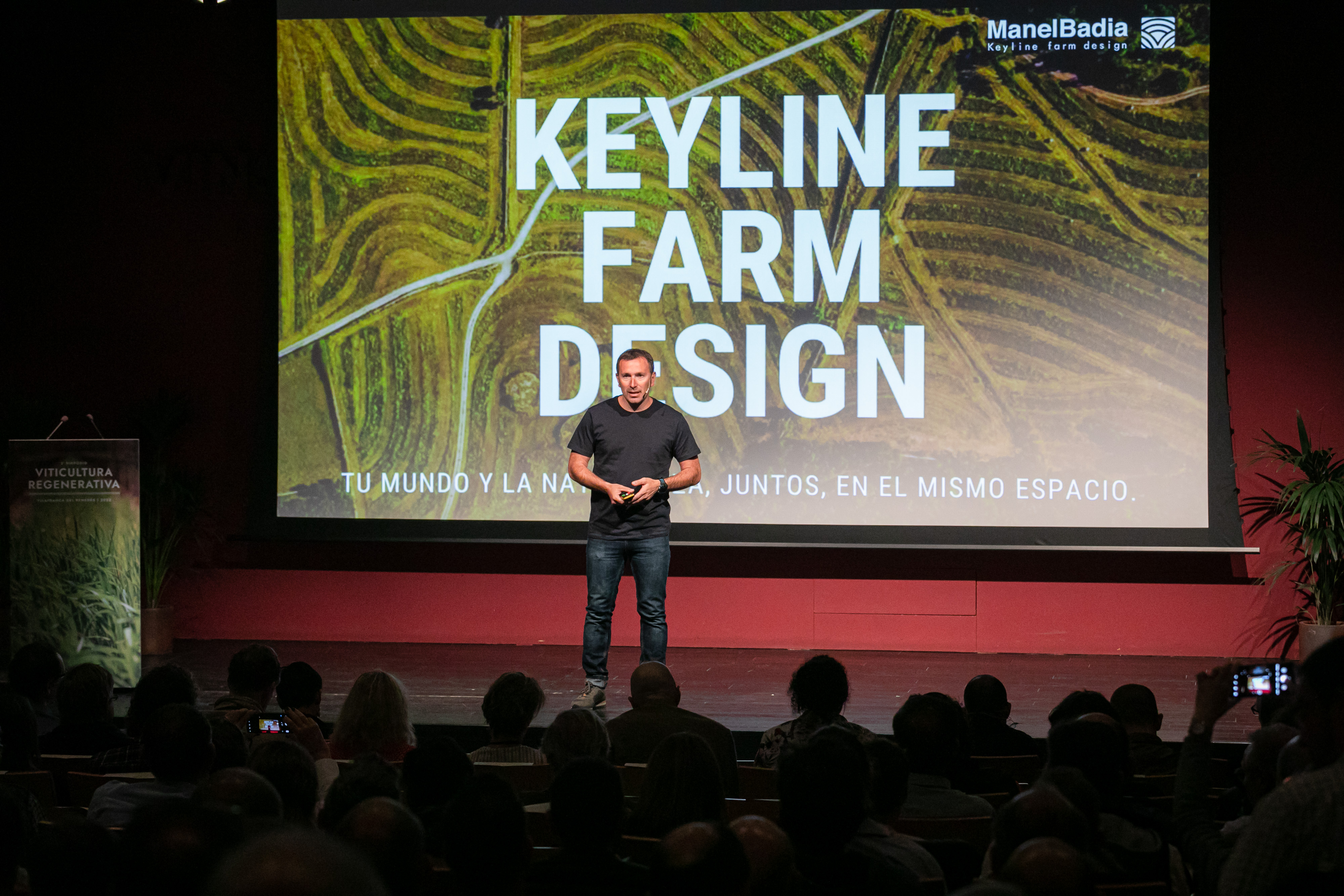 Manel Badia during his presentation at the second Regenerative Viticulture Conference

The conference also covered the subject of regenerative livestock farming, a related discipline which shares the same foundations as the viticultural model. This is Pablo Borrelli’s area of expertise, and the Argentinean farmer urges others to “move away from reductionist decisions and begin contemplating the connections between all of the elements, including business and social aspects.”

With patience, replanning, and corrective adjustments, it is possible to obtain quantifiable improvements — for instance, with the EOV method developed by Borrelli’s Savory Institute, with the Argentinean province of Corrientes providing an example: if cattle emits 6,000 tonnes of carbon dioxide equivalents (CO2eq) per year, holistic management makes it possible for the soil to capture 26,000t CO2eq, “a fantastic opportunity” to reverse the effects of climate change “at a crucial moment”. 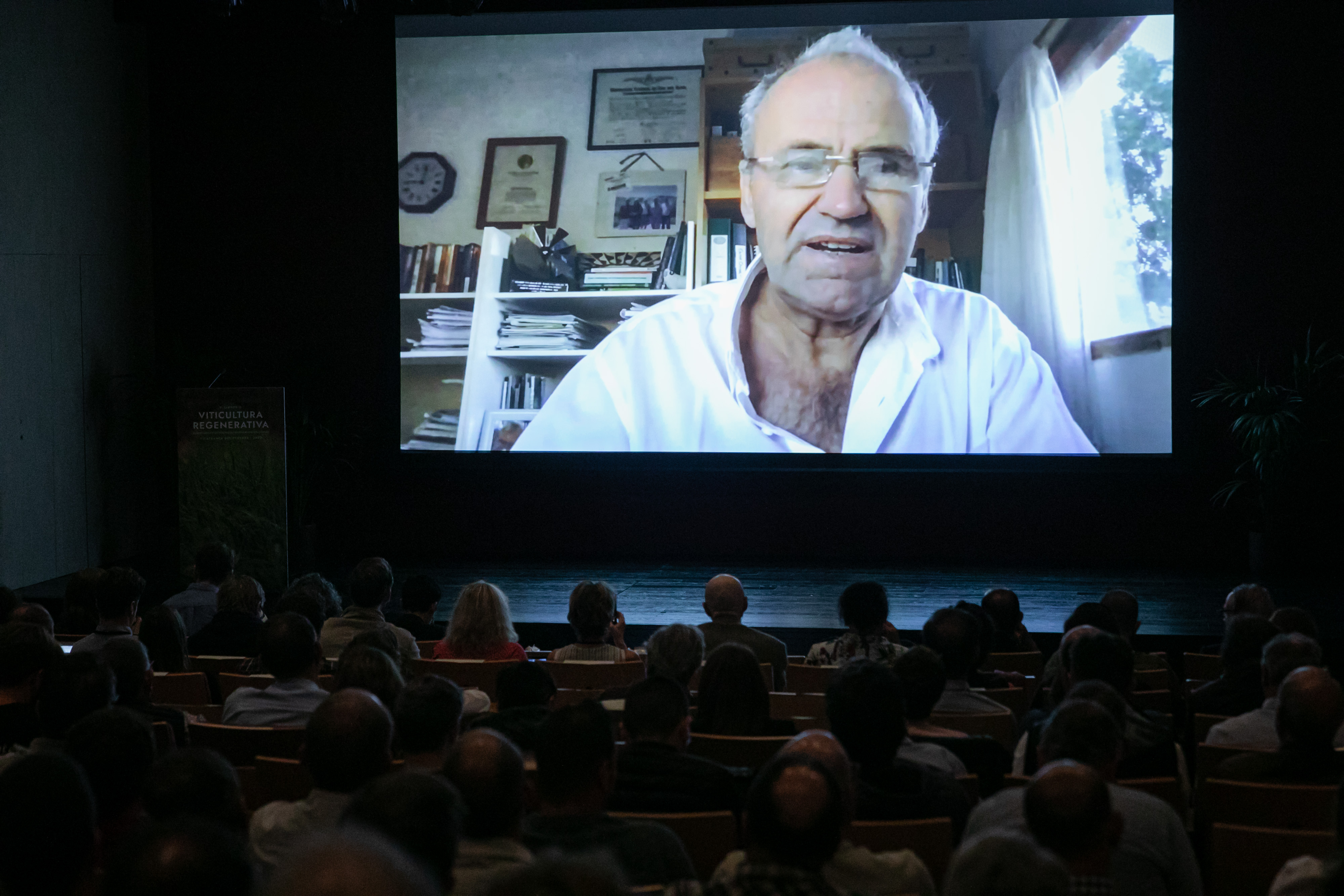 “The regenerative model will become the norm, a new culture that will also revive rural communities on the verge of disappearing, which will help restore their traditions and history, enriched thanks to a new perspective.  There is nothing to lose.” Pablo Borrelli

The general manager of Familia Torres, Miguel Torres Maczassek, also spoke at the conference, championing regenerative viticulture as an answer to the threats of climate change, erosion, and the loss of soil fertility. As president of the Regenerative Viticulture Association, he celebrated the continuity of the conference and the “traction” the association is gaining, which already has around 30 members. Miguel Torres described the experience of certain members who set out to restore the life of the soil, making it more fertile and resilient to better mitigate the effects of climate change in a manner similar to forests. 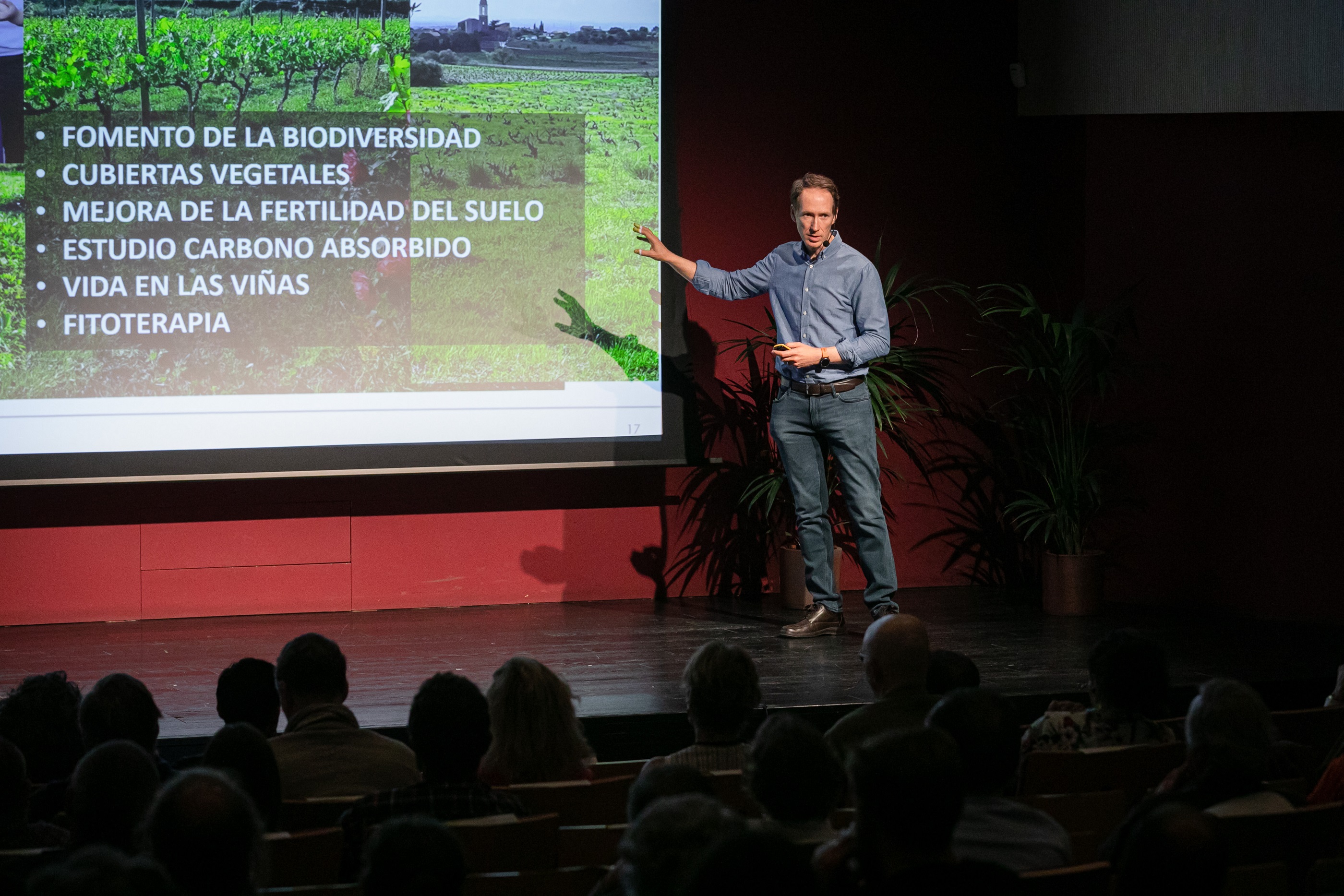 What Regenerative Viticulture calls for is a look back, a moment of respite and  reflection. We need to understand the earth and how it works in order to improve its health, repair the damage done, and make sure it provides the greatest possible benefits, taking advantage of processes that nature has developed over billions of years.