About four hundred million years ago, fish decided to tentatively leave the realm of water and venture beyond its boundaries for the very first time. But they did so without completely giving up the safety of the aquatic environment - it was to be a round trip to the shore.

Driven by the urge to explore, those pioneers gradually adapted their pectoral fins to be able to walk on land and enter the promising terrestrial environment. Their adventure represented one of the greatest evolutionary leaps in the history of the biosphere, giving rise to the first amphibians (amphí, "of both kinds" + bíos, "life").

Since that first 'excursion' out of the water, this class of vertebrates has progressively evolved in an astonishing way and now makes up a varied catalogue of genera that, according to herpetologists, contains around 7,500 different species spread throughout the planet's temperate zones.

For all these reasons, amphibians are one of the best examples of adaptation to the planet and of the interconnection between aquatic and terrestrial ecosystems. Over time, their evolution has given rise to two distinct groups of species: tailed amphibians, which are in the order Urodela and include newts and salamanders, and tailless amphibians, in the order known as Anura, essentially made up of frogs and toads.

In the case of the latter, and despite the fact that their lives are also being altered by the effects of climate change, as is the case with most of this blog's subject matter, the advent of spring heralds the best time of the year to get out into nature and enjoy their presence.

The reproductive cycle of frogs and toads begins every year between the end of March and the first few days of April, when it's very common to hear them croaking in the ponds and puddles in our fields to mark their territory and attract the females. And also in the area around agricultural irrigation basins, which are often located among vineyards, helping to speed up the vines' development until the grapes emerge to the sound of the batrachians (from the Greek bátrakhos, which literally means "frog").

Among all the frogs that thrive in our countryside at this time of year are two that are particularly remarkable for their beauty: the Iberian tree frog (Hyla molleri) and its first cousin, the Mediterranean tree frog (Hyla meridionalis).

Classed among the most beautiful examples of Iberian fauna, their pastel green colour (which can even be bluish) and soft, rounded bodies make them look like two tiny plasticine figures, barely reaching five centimetres in length. 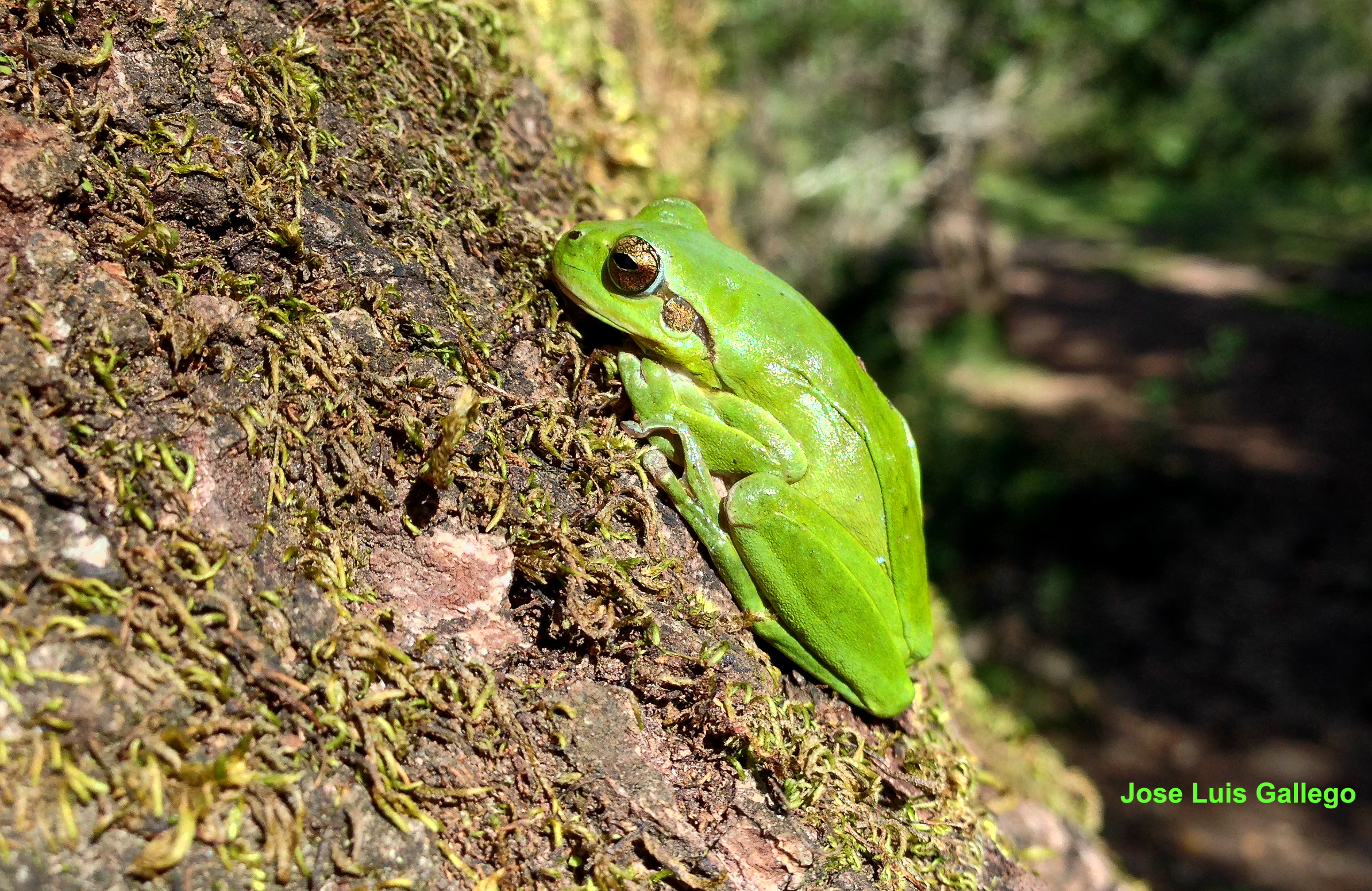 A plasticine frog on the bark of a tree. Photograph by Jose Luis Gallego.

They differ from each other in that the Iberian tree frog has a golden-brown flank stripe along its entire body (much shorter in the Mediterranean tree frog), dividing it into two parts: from the eye, in the form of a mask, to its back legs.

During the mating season, the males inflate a huge vocal sac under their chin like a gigantic bubble gum balloon, then release the air to create their characteristic croaking sound.

As tree-dwellers, both species love to perch on branches to emit their calls, so it's not uncommon to find them in treetops, even quite far from water.

Frogs feed on insects and are therefore highly beneficial for humans. They don't sting, bite, transmit diseases or harm anyone. Like the rest of our amphibians, the populations of both the Mediterranean and the Iberian tree frog are in decline (especially the latter), threatened by the pollution of our aquatic ecosystems, the drying out of wetlands and rising temperatures due to the climate crisis.

To end, it should also be noted that all species of amphibian are strictly protected by law, so they can't be captured and much less harmed or their habitat altered. And there's no point in testing out the famous myth regarding frogs: no case has ever been recorded of a frog turning into a prince after being kissed.