The Kestrel: The Vineyard Kite

Whenever I see a kestrel in flight, I remember the first time I ever encountered the species, when I was still a boy. It was outside a farm shed on a small family vineyard. When I spotted the bird, I grabbed the field binoculars that I had just been given as a present and tried to identify it. There it was—suspended in the sky, its tail feathers fanned out, fiercely batting its wings, head tilted down, eyes fixed on the furrows of the vineyard. This little bird of prey was like a kite come to life.

I was surprised how it stayed in one place, hovering in the sky, intently fixated on the ground, as though it had dropped something. And then, suddenly, it descended—slowly, without taking its eyes off the ground—and vanished between the vines. Moments later it took off again, flying away from the vineyard, gripping a small field mouse in its talons.

The kestrel is a small species of falcon, a cousin of the hawk, merlin, and hobby, which is easy to spot in open spaces, especially in meadows and vineyards, grain fields and other cropland, marshes, and around villages. 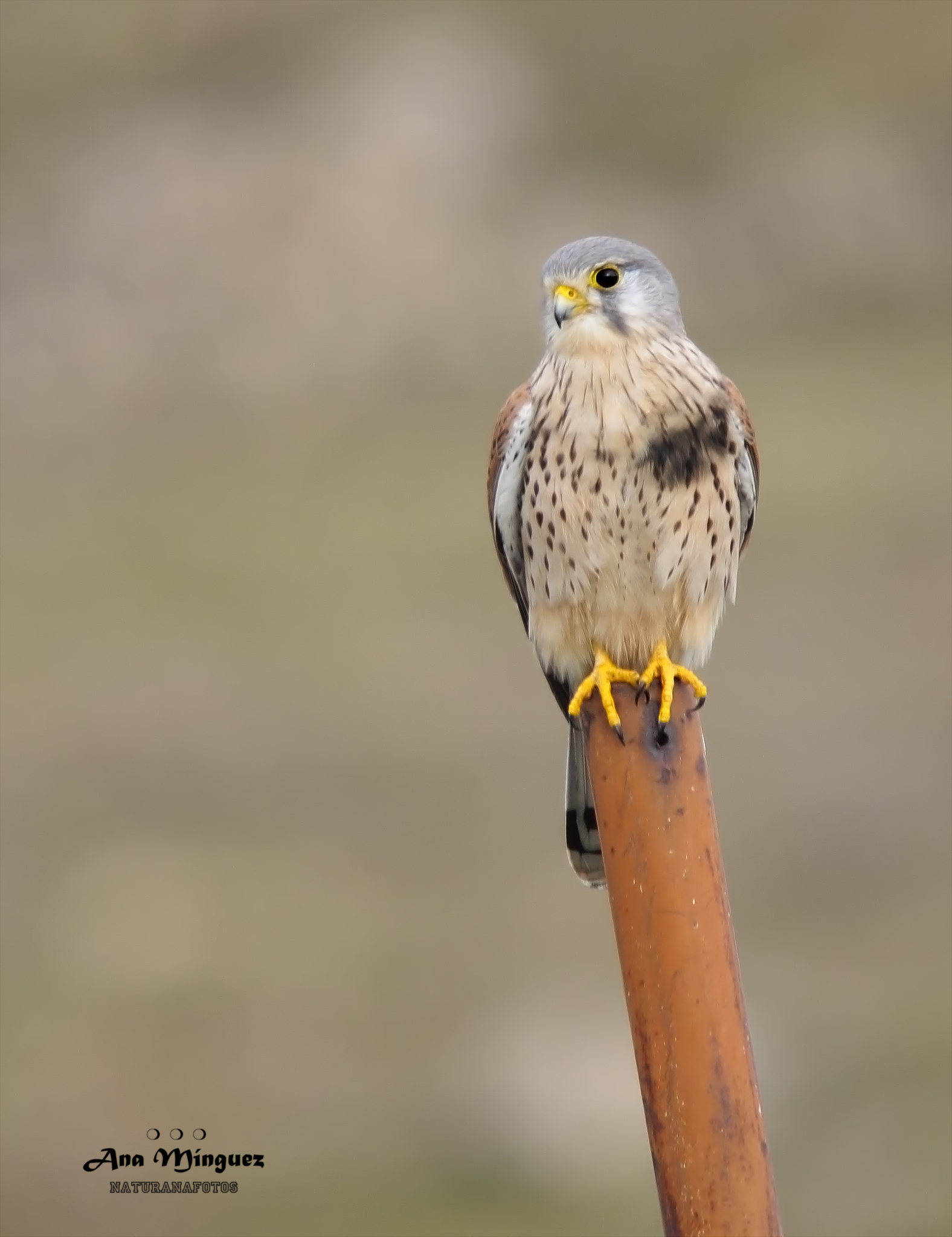 Two species breed on the Iberian peninsula: the common kestrel (Falco tinnunculus), a permanent resident; and the lesser kestrel (F. naumanni), which spends its summers here.  The former is far more abundant and ubiquitous, with beautiful rusty plumage on the wings and back, and a cream-coloured chest with speckled black stripes. Male kestrels have a silver grey head, although the colour is far more subdued and contained compared to the lesser kestrel. 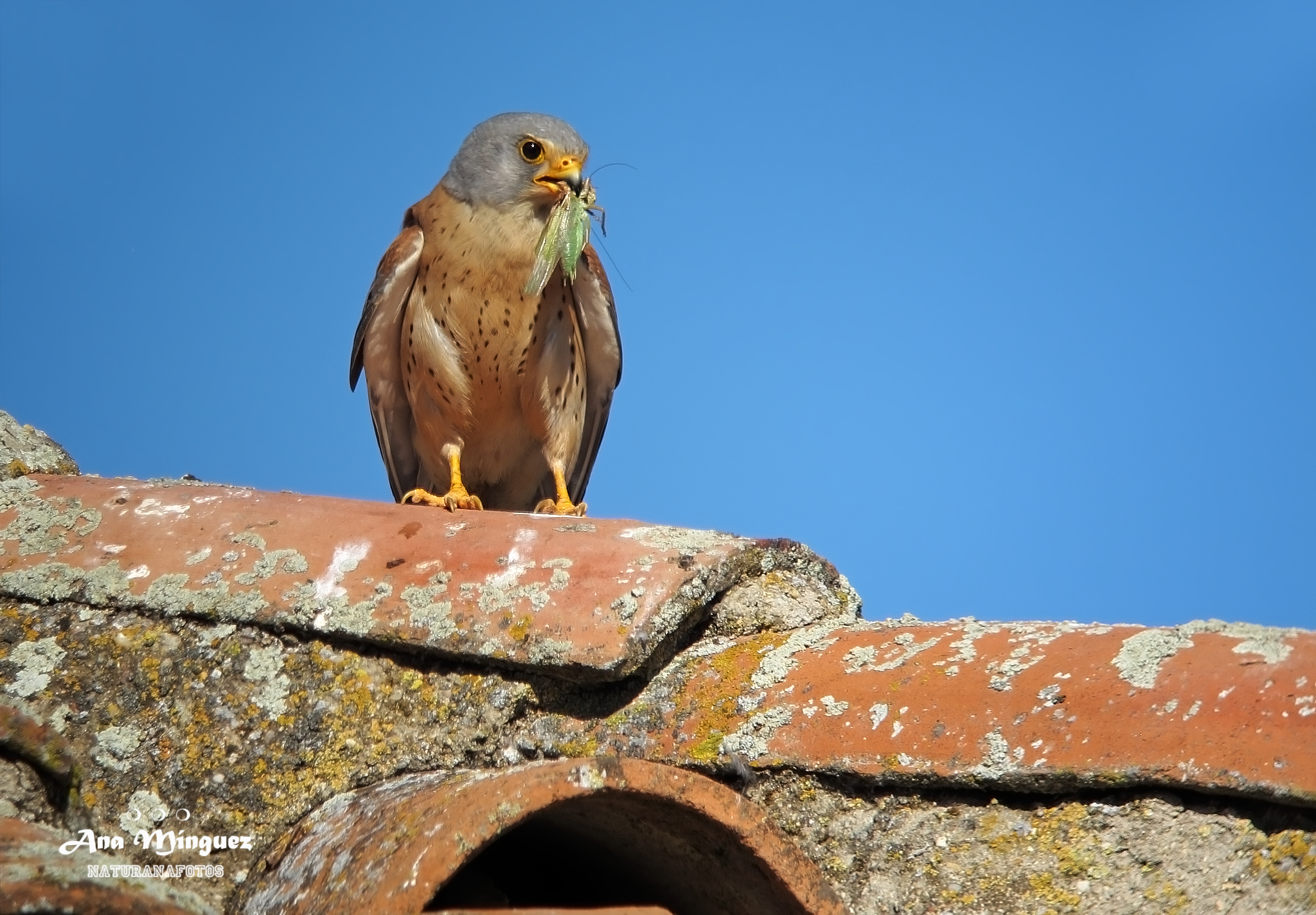 As is the case for most birds of prey, the female is bigger than the male and sports black barring, like tiger stripes, on her back, with a prominent head and very striking, distinctive black slashes below the eyes. The bird is around 35 cm long and has a wingspan (distance from wing tip to wing tip) of up to 180 cm. Females can weigh up to a quarter of a kilo.

But like I said, the bird is best identified by its flight pattern, the way in which it flaps its wings, which are broad and pointed, and its long tail feathers that taper to a diamond shape.  The kestrel is known for hovering in the air, rapidly beating its wings to stay suspended for long stretches as it hunts for prey. This is when it unfolds its tail as though it were a fan, with a black spot on each feather tip. The kestrel is an extraordinarily controlled aerialist, and when it positions itself towards the wind, it can stay aloft without moving its wings, its feathers rippling as though it were a kite.

Whereas the lesser kestrel is a keen traveler and spends its winters in Africa, the common kestrel prefers to stay on the peninsula year round. It feeds on insects, reptiles, rodents (it is an expert vole hunter), and other birds. The kestrel has a powerful, shrill call (chi, chiii, chiiii), which it uses when it feels threatened or spots someone close to its nest. 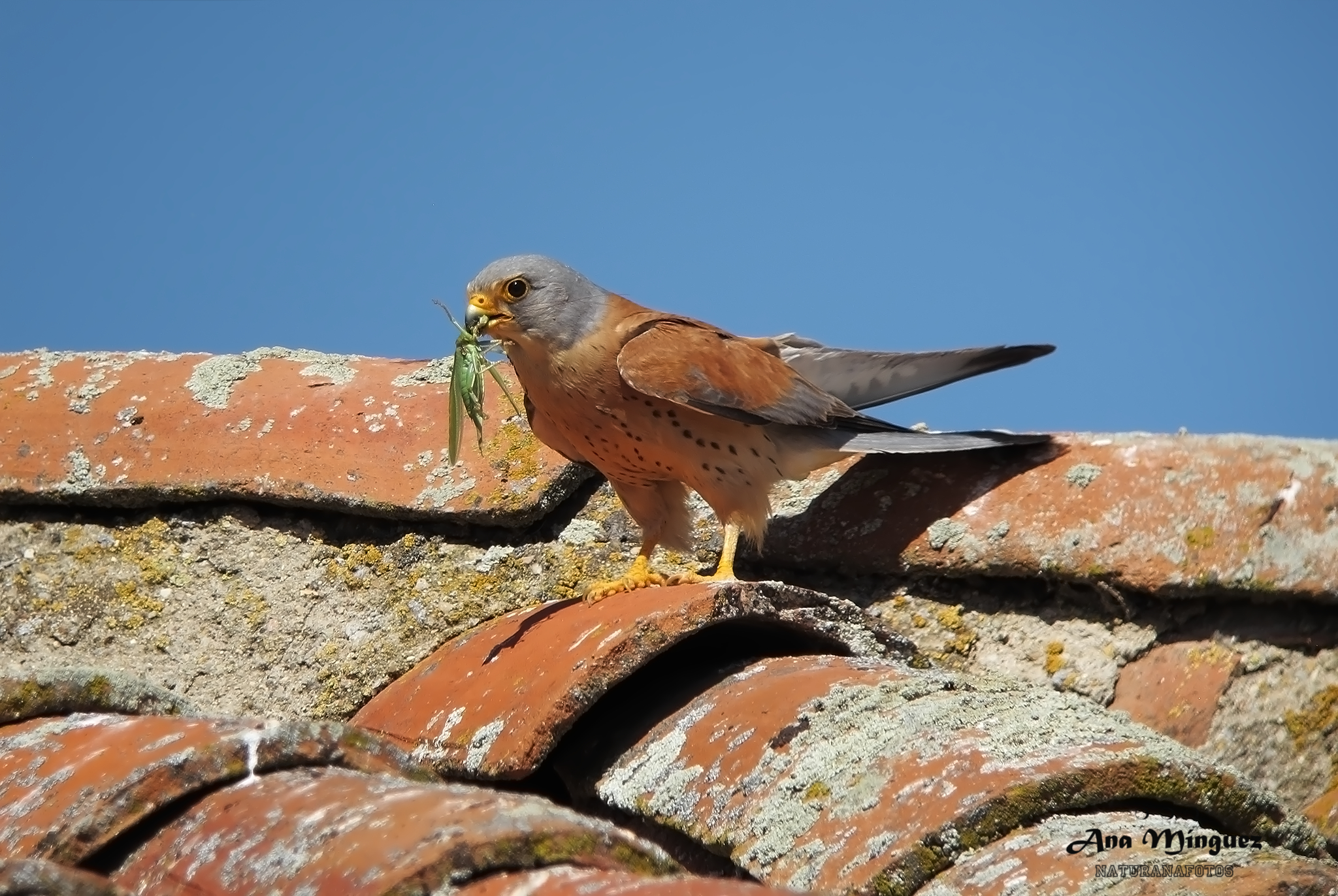 A lesser kestrel on a roof. Photograpy: Ana Mínguez.

Very similar to the common kestrel, the lesser kestrel is smaller and more graceful and elegant in appearance. The male specimen is among the most beautiful birds of prey in all European avian fauna. What truly sets it apart from its common kestrel counterpart is the blueish grey hue of its head, very evenly distributed, and the lack of mottled specks on its back, which is more reddish in colour. In flight, the chest appears unspeckled, with an orange tinge.

Although the females of both species are more easily confused, the lesser kestrel is smaller, with a slimmer build, and its upper parts display less black barring than those of the common kestrel. Lesser kestrels are less prone to hovering and more urban, often establishing breeding colonies in churches or cathedrals or in abandoned rural buildings.

Kestrels have learned that roadside areas are an ample pantry of roadkill, which is why we often see them perched on telephone poles, advertising billboards, and road signs.  Lesser kestrels basically eat insects of all sizes, even very large ones: from grasshoppers and beetles to locusts, dragon flies, cicadas, and praying mantises.  Occasionally they’ll also catch small reptiles.

By contrast, the common kestrel is capable of rounding out its diet with larger prey, such as shrews, mice, voles, small and medium-sized birds, and medium-sized reptiles and amphibians: lizards and geckos, frogs, salamanders, and small snakes. 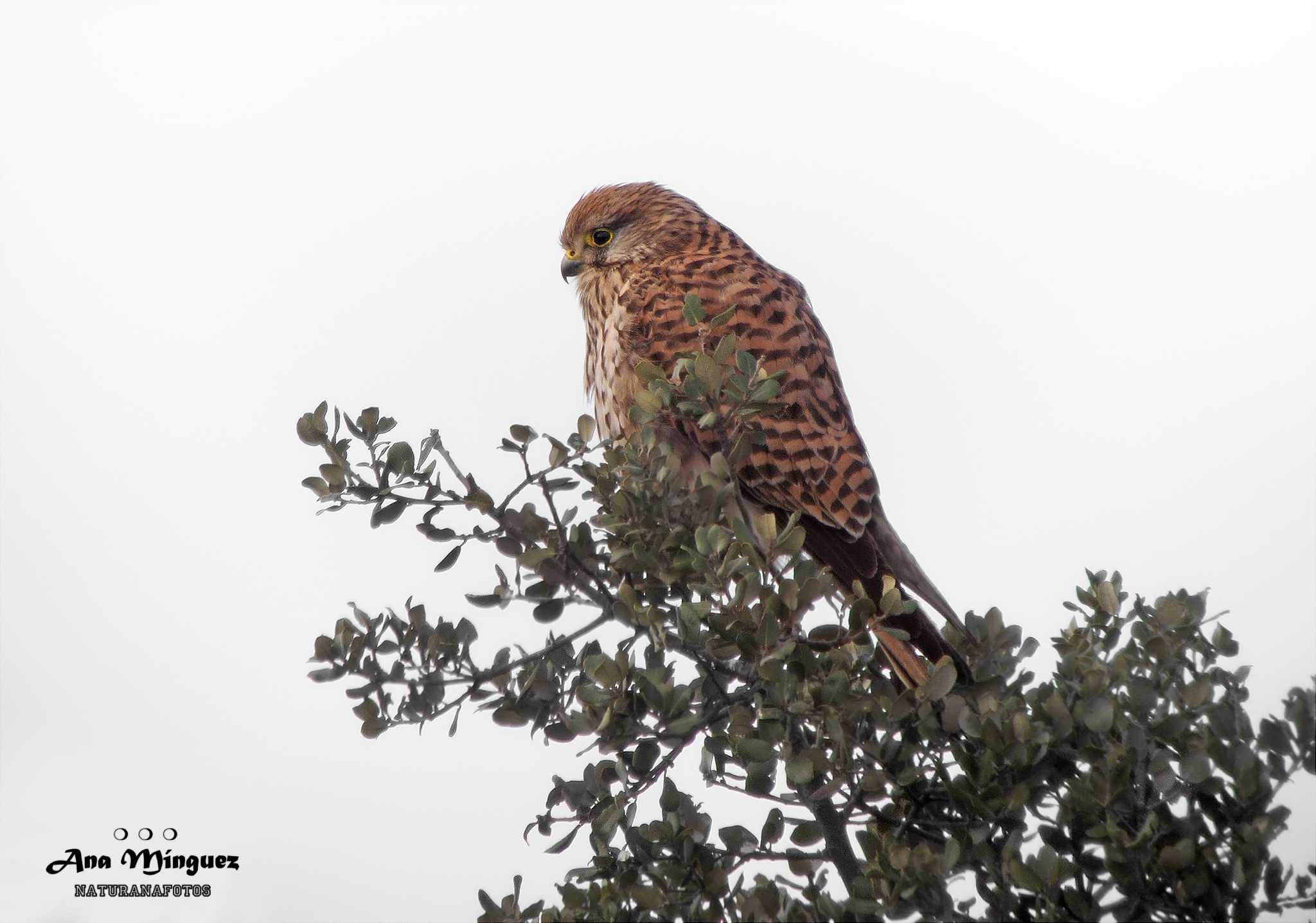 A common kestrel on a branch. Photograpy: Ana Mínguez.

In addition to these two species, in recent years, during the migratory period (March–April/August–September), there have been more and more sightings of a third species of kestrel: the gorgeous red-footed falcon (Falco vespertinus). This striking bird of prey—the male boasts blueish-grey plumage with bright coral-red untertail coverts and legs—breeds in the Middle East, but some individuals cross the Iberian peninsula during their migratory flight and can be spotted in the northeast and the Balearic Islands.