The Dragonflies of the Pond: Galactic Creatures

Taking a summer dip in the reservoirs, ponds, and irrigation canals scattered throughout the fields brings us into contact with insects that make this their habitat of choice, among them some of the most spectacular invertebrates of the Iberian fauna.

Pondskaters, backswimmers, diving beetles, giant water bugs, and other species comprise the aquatic fauna that lives between the muddy bottom and the surface, offering a fascinating field study for any amateur naturalist who comes by for a refreshing dip.

And whereas the insects that live below the water may be surprising, they pale in comparison to the extraordinary creatures that fly above it in search of food, especially those of the Odonata genus, commonly known as dragonflies and damselflies.  What differentiates the two is that the former is larger and has horizontal wings (like a helicopter), whereas the latter is smaller and extends its wings vertically. 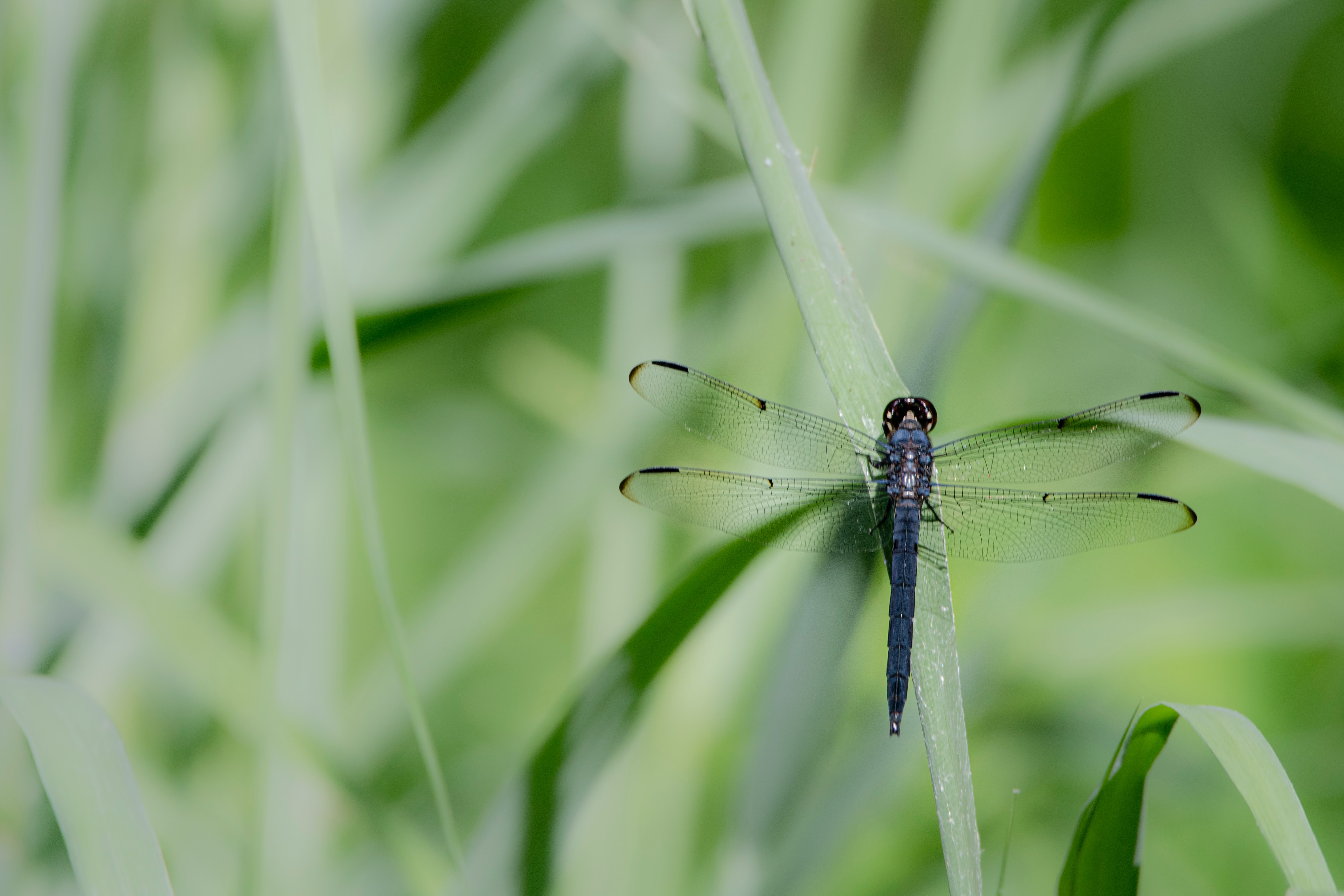 A dragonfly in its natural habitat

I clearly recall a day when I bathed in a river pool surrounded by these amazing glass-like creatures, flying across the water’s surface like tiny airborne robots, coming to rest, ever so briefly, on the water lilies and the tips of bulrushes.

Dragonflies have two pairs of large elytra — the scientific term for insect wings — that are very long and straight and can move independently. They allow dragonflies to fly forward and back, ascend, descend vertically, or spend a long time suspended in the air. As for their flight speed, some species can reach up to 100 kilometres per hour. Who can match that?

No fantasy film director, not even George Lucas himself, could have designed an animated creature more extraordinary than certain dragonflies. This includes the great emperor dragonfly (Anax imperator) which grows to 8 centimetres in length, with a 12 centimetre wingspan (from one elytron tip to the other), making it the largest dragonfly in Europe and one of the most spectacular flying insects on Earth. 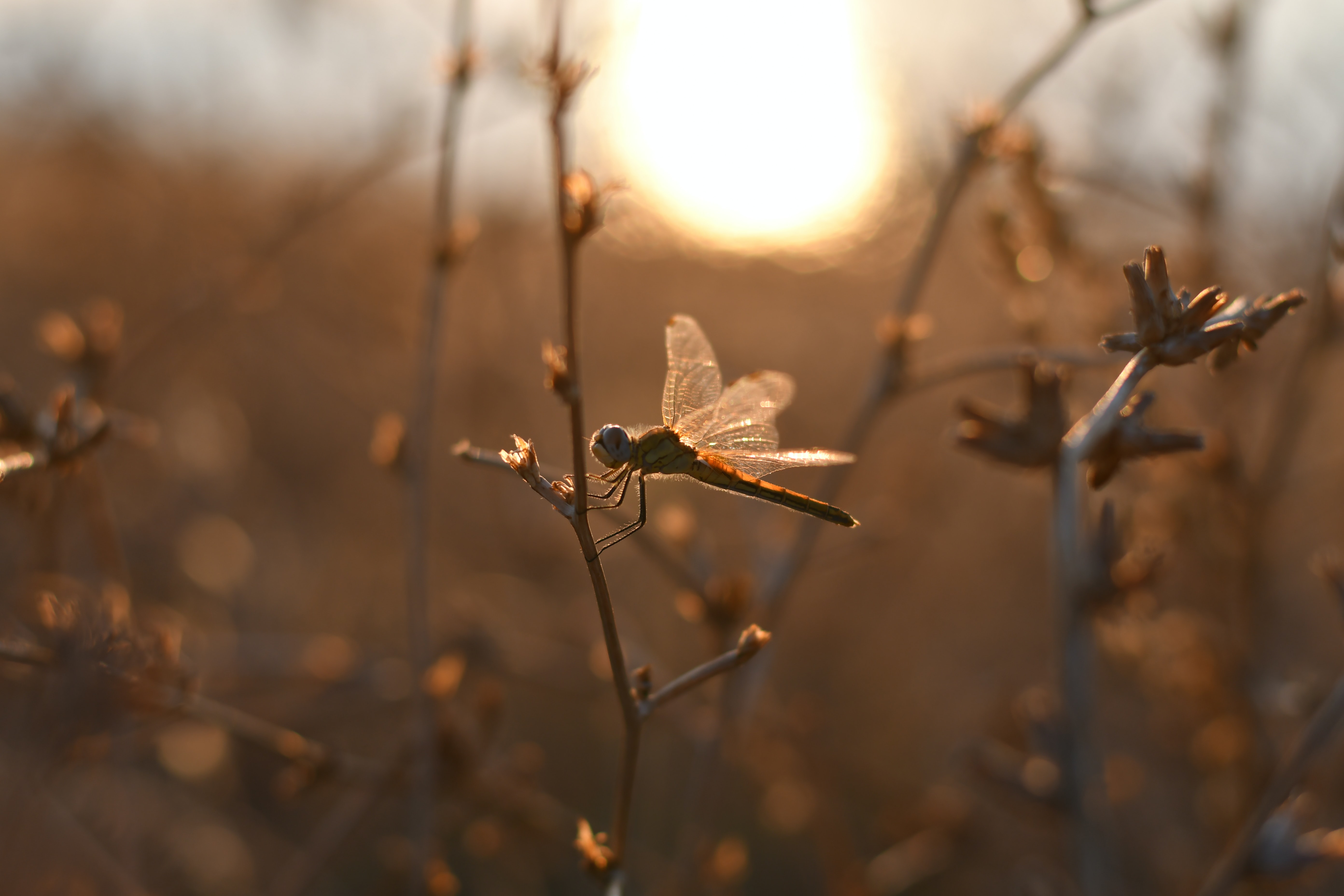 A dragonfly at sunset in summer

The mere sight of a dragonfly suspended in the air, like a helicopter on a rescue mission, is indeed surprising, but seeing these insects mate is incredible.  Dragonflies usually copulate in the air, attached at the abdomen, so they can keep flying, sort of like a doughnut with wings: watching them move about in this way is truly astonishing.

They often come to rest on lakeside vegetation or on rocks to “recharge”, extending their long wings to soak up the sun, similar to solar panels, and quickly recover their expended energy. By contrast, when the weather is very hot, they come to rest in a vertical position, keeping their body perpendicular in order to expose as little of it to the sun as possible.

Seventy-nine species of Odonata call the Iberian peninsula their home, many of which are in danger of extinction.  These insects play a crucial role in maintaining the health of the ecosystem, in addition to being beneficial to us humans as natural predators of flies and mosquitoes, thereby keeping these populations in check.

Despite their large size, they are completely harmless to humans: they never bite or transmit diseases or damage crops in any way.  For all of these reasons, we shouldn’t fear them, but rather treat and enjoy their presence with admiration and respect.

In addition to pools and ponds, these insects seek out fountains, lagoons, the edges of reservoirs and backwaters, marshes and other kinds of swamps, and in the summer even swimming pools, where they flock in the mistaken belief they will find food there.  If this should happen one of these summer days, and we are taking a dip when a dragonfly appears, it would be an excellent opportunity to observe them closely and explain their benefits and complete harmlessness to anyone fearful of them.