Birds in the Vineyard: The Red-legged Partridge

If we had to choose a wild bird species as the avian representative of vineyard dwellers, one of the most qualified candidates would no doubt be the beloved red-legged partridge. 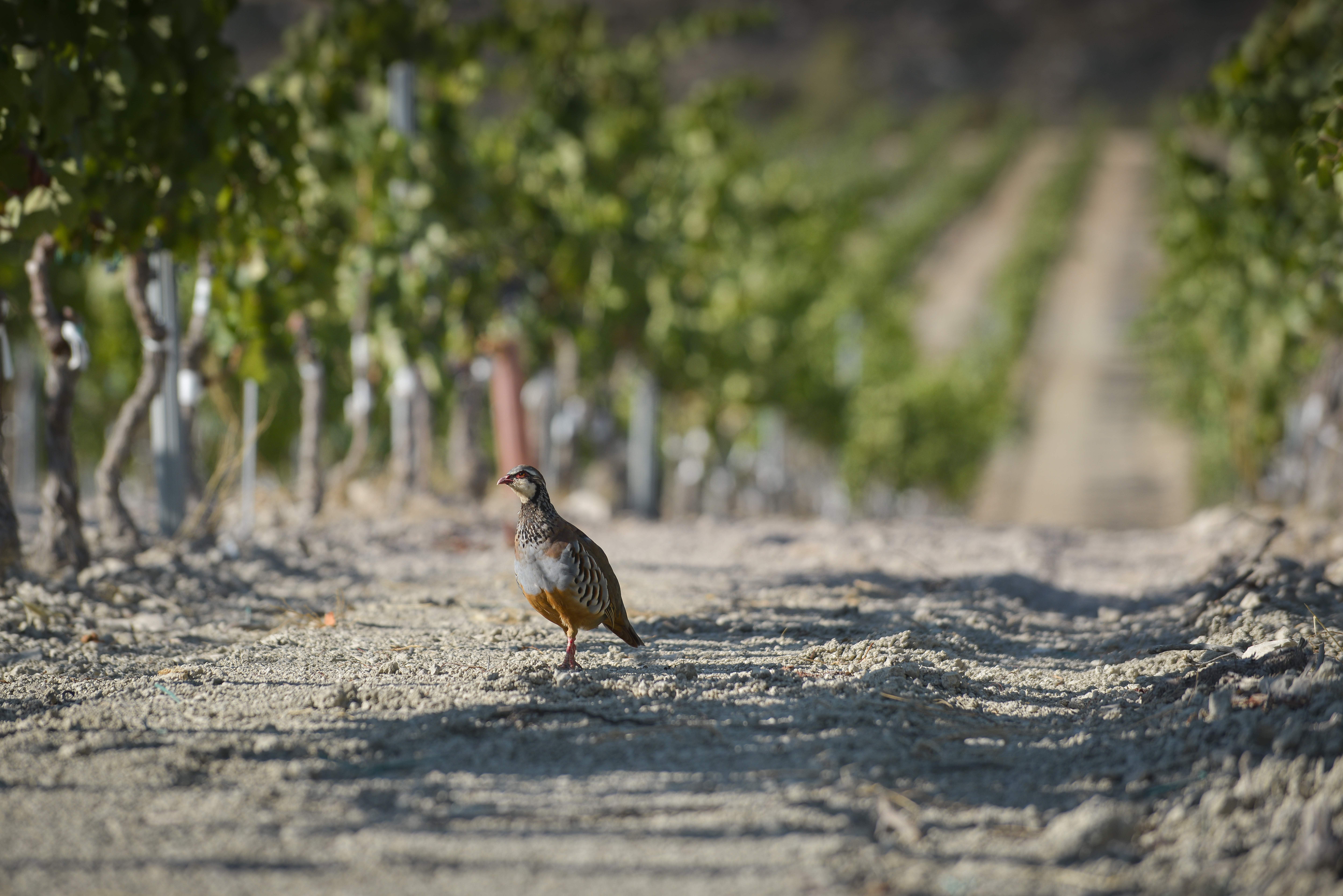 Known in Spanish as the perdiz roja or la patirroja (especially in Castile), and to scientists as Aleactoris rufa, the species has a natural fondness for life between the vines. The partridge frequently nests amid the shrubbery along the banks and edges of the vineyards, where it finds an abundance of its favourite food source: wild grasses.

In this regard, the growing trend of cultivating grapes in harmony with wild plants – one of the tenets of regenerative agriculture – has further encouraged this species to settle in the immediate vicinity of the vineyards.

The red-legged partridge is easily recognizable, with a slender, rounded body that makes for an unmistakable backlit silhouette. When caught in direct sunlight, this gorgeous wild bird displays one of the most elegant liveries of the Iberian countryside: an exceptional combination of red, white, and black, with smatterings and gradations of orange, grey-brown, and sky-blue make this one of the most beautiful species in Europe.

It has a short blunt beak with a finely tapered tip, crimson red in colour, the same shade as the rim around its eye. The eye markings are particularly elegant: below a white brow, a fine line of black feathers frames an ample ivory ruff and forms a stunning jet black collar that blends into the sky-blue of the chest plumage below. 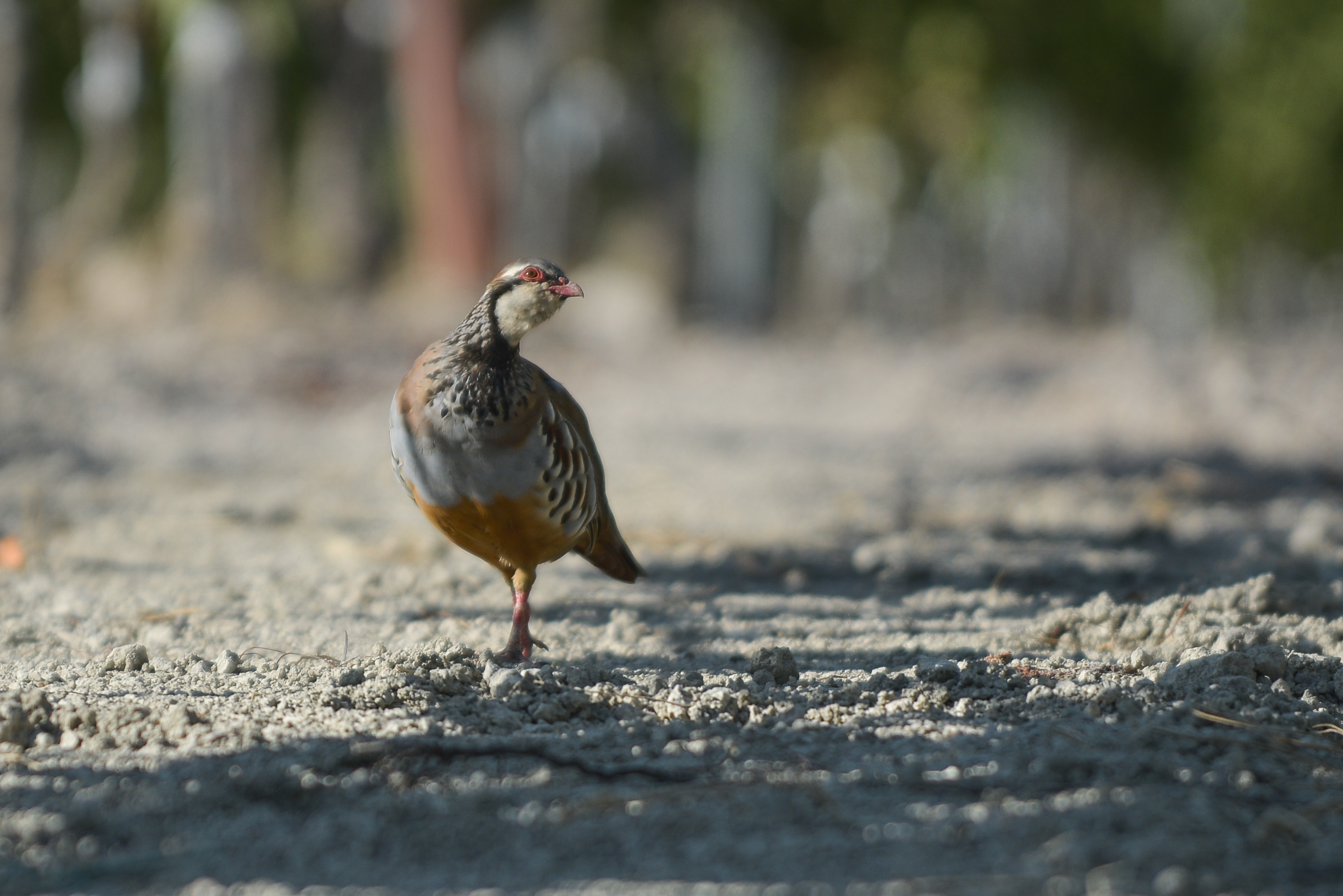 The tail is short, thick, and rectangular, while the plumage along the sides forms a dense tapestry with characteristic striations that cover both sides of the abdomen. Emerging like two red corals from the intense orange hue of the bird’s lower abdomen are short, sturdy legs – the feature that gives the red-legged partridge its name. (The same is true for its Spanish nickname la patirroja, used by the great novelist and nature writer Miguel Delibes when referring to the bird.)

Not fond of flying, the red-legged partridge is fleet-footed and commonly spotted running about on the dirt paths or the furrows in the fields. In the spring and summer, the partridge is usually accompanied by its chicks, which follow their mother in an orderly single file.

The partridge's unmistakable silhouette against the first light of dawn or the last rays of sunlight before dusk is among the most iconic motifs of our countryside. However, changes to the bird's natural habitat – the Mediterranean hills – along with farmers abandoning traditional crops and the excessive use of agrochemicals are causing the wild partridge population to dwindle in Spain.

Instead of mitigating this decline, repopulation schemes with farmed partridges are only exacerbating the already delicate situation of the species, which – as a game bird – is also under great pressure from hunters. Its smaller neighbour, the quail, shares a similar fate and is fighting the same battle.

Wild partridges not only inhabit agricultural ecosystems, but also venture into high plateaus and Mediterranean scrubland steppes. Even so, its indigenous distribution has been altered by a hunting-oriented repopulation effort at game preserves across the peninsula. As a result, the indigenous species is in clear decline, whereas the farmed partridge – a far less flighty, almost domesticated animal – can be found everywhere, even in the middle of villages.

These industrially farmed birds, which are introduced to repopulate game preserves, have little in common with their wild kin: they are far less lively and much tamer than the indigenous red-legged partridge. They rarely hide when spotted by humans, and their plumage is nowhere near as vibrant as that of field partridges, nor do they boast the same power and beauty in their song.

The call of the red-legged partridge is among the most emblematic soundtracks of our countryside, accompanying farmers as they work the fields – especially during the harvest – since time immemorial. 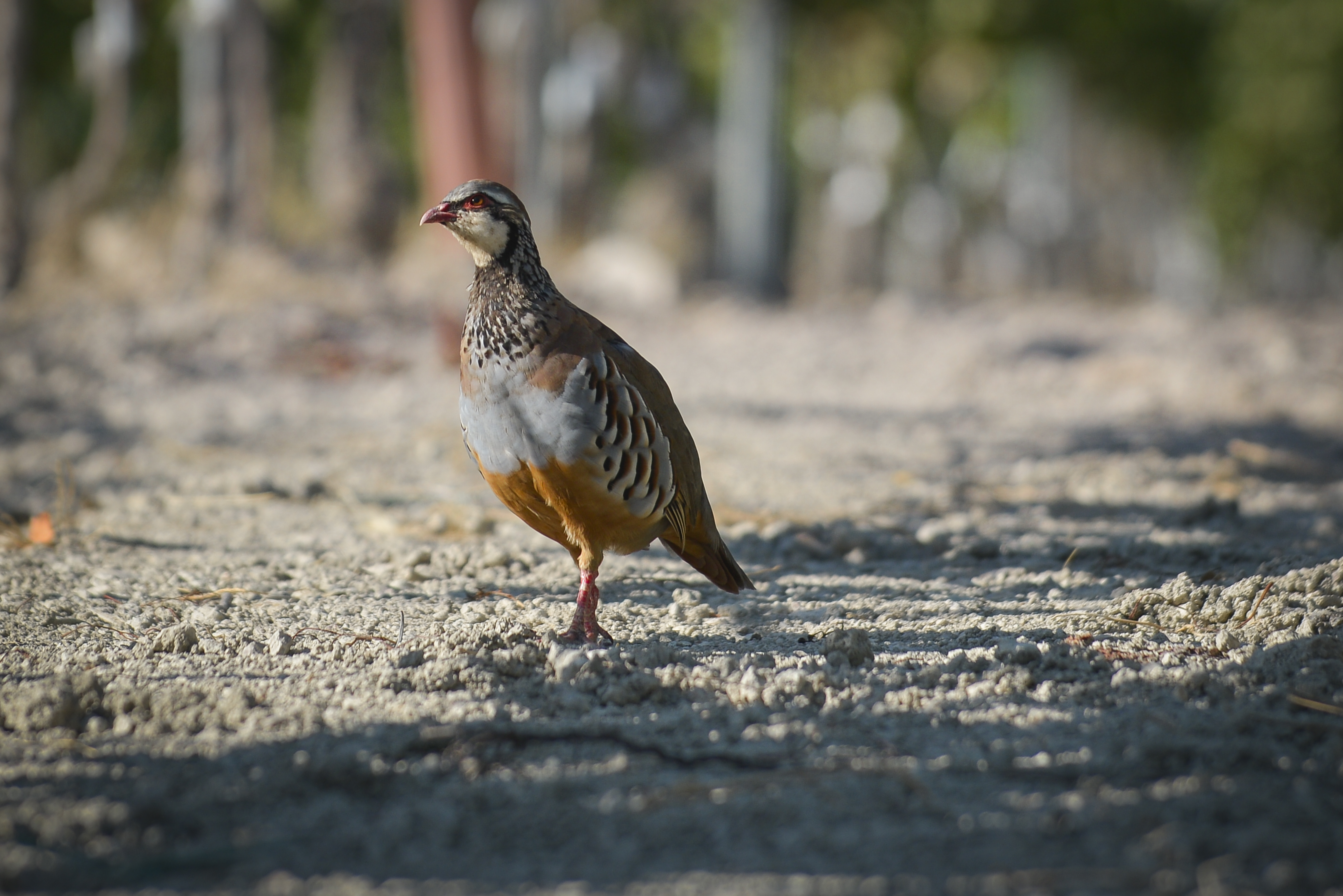 Worst of all, farmed partridges are putting wild populations of genuine red-legged partridges at risk, because they spread diseases and produce hybrids that alter the genetic characteristics of the species. Perhaps the reader won't grasp the seriousness of this problem, thinking quite logically that “they're all partridges, after all”, but they're not all the same. For those of us who consider the red-legged partridge one of the world's most beautiful birds, this is an enormous loss.