The slow decline of the sparrows

Its call is the soundtrack of spring and summer days in the fields and villages, as it was in urban parks and gardens until recently. However, the House Sparrow (Passer domesticus), one of Europe's most abundant and ubiquitous birds, is disappearing from cities at an alarming rate.

Well known and very easy to identify, its plumage shows a beautiful combination of chestnut, tan and greyish-white tones. The male is clearly distinguishable from the female by its grey hood, white cheeks and, above all, by the black bib on its chest, which is more marked during the mating season. Females and juveniles have cinnamon tones and are much more uniform and discreet. It is about fifteen centimetres long and weighs around thirty grams. 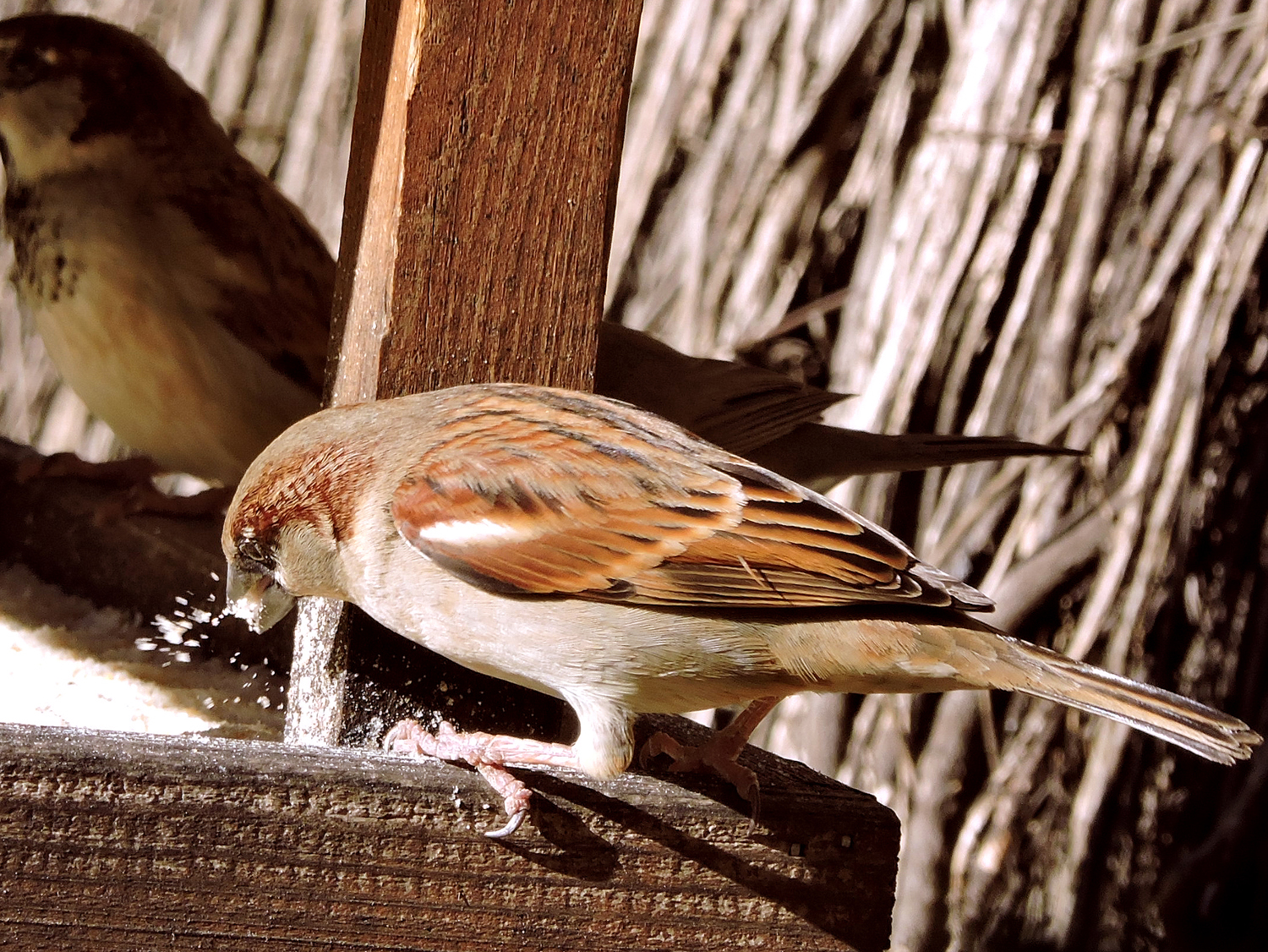 Sparrows feeding at an urban feeder (Photo by: Jose LuisGallego)

House Sparrows have adapted to all environments, both wild and urban, but rarely settle far from inhabited areas; they are especially abundant in the city, where they tend to form large flutters. They nest in the most unexpected places: in the cavities of buildings, in amongst the ivy on walls: they can make use of any hole to build their nests and raise their chicks in several clutches a year.

Although they feed mainly on grains and seeds in the countryside, city sparrows hop around yards, streets and gardens looking for any scraps of food to peck up in their beaks. They do not sing, but nevertheless they never fail to emit their characteristic call: a screeching and repetitive chiiiip-chiiiip that makes them somewhat noisy, especially during the breeding season - from May to July - when the chicks continuously call their parents to feed them.

However, as I said, changes in agricultural practices are causing a decline in their populations in the countryside. Intensive agriculture, characterised by the extension of large monocultures and the indiscriminate use of agrochemicals, has led to the loss of the sparrow's habitat in rural areas. In the city, on the other hand, ornithologists attribute their decline to a decrease in green areas, a shortage of food or increased levels of air pollution.

As a result, urban populations of this familiar fringillid have declined by almost 65% across Europe since 1980. In Britain, around five million House Sparrow pairs have disappeared in the last 30 years. They have all but disappeared from London. The cute pictures of the sparrows eating out of the hands of visitors to Hyde Park, St. James Park or Regent's Park or perching graciously on their hats are now history.

But in addition to these causes, there is also the spread of the avian malaria epidemic. A study carried out by the ZSL (Zoological Society of London), the RSPB (Royal Society for the Protection of Birds) and the British Trust for Ornithology (BTO) raised alarm bells a few years ago by detecting this disease –which only affects birds– in 74% of the sparrows in the colonies studied.

But beyond the threat to the survival of this once common species, the slow decline of the House Sparrow, like that of other species native to urban and rural ecosystems, is acting as a bio-indicator: another sign that human-inhabited environments are becoming increasingly unhealthy.