The Eurasian Eagle-Owl, Lord of the Winter Night

A lot of people are incapable of venturing into nature after nightfall. The fear of the unknown, amplified by the sounds of woodland creatures, fills them with the uncontrollable feeling of not being safe.

But believe me when I tell you that strolling through the fields in the evening is among the best ways to enjoy nature and discover one of the most fascinating group of species in all Iberian fauna: nocturnal birds of prey.

Eagle-owls have inspired a special fascination among humans since time immemorial. Perhaps because they are crepuscular birds, living beings who, unlike us, have managed to develop their senses in such a way as to move with complete confidence in total darkness. 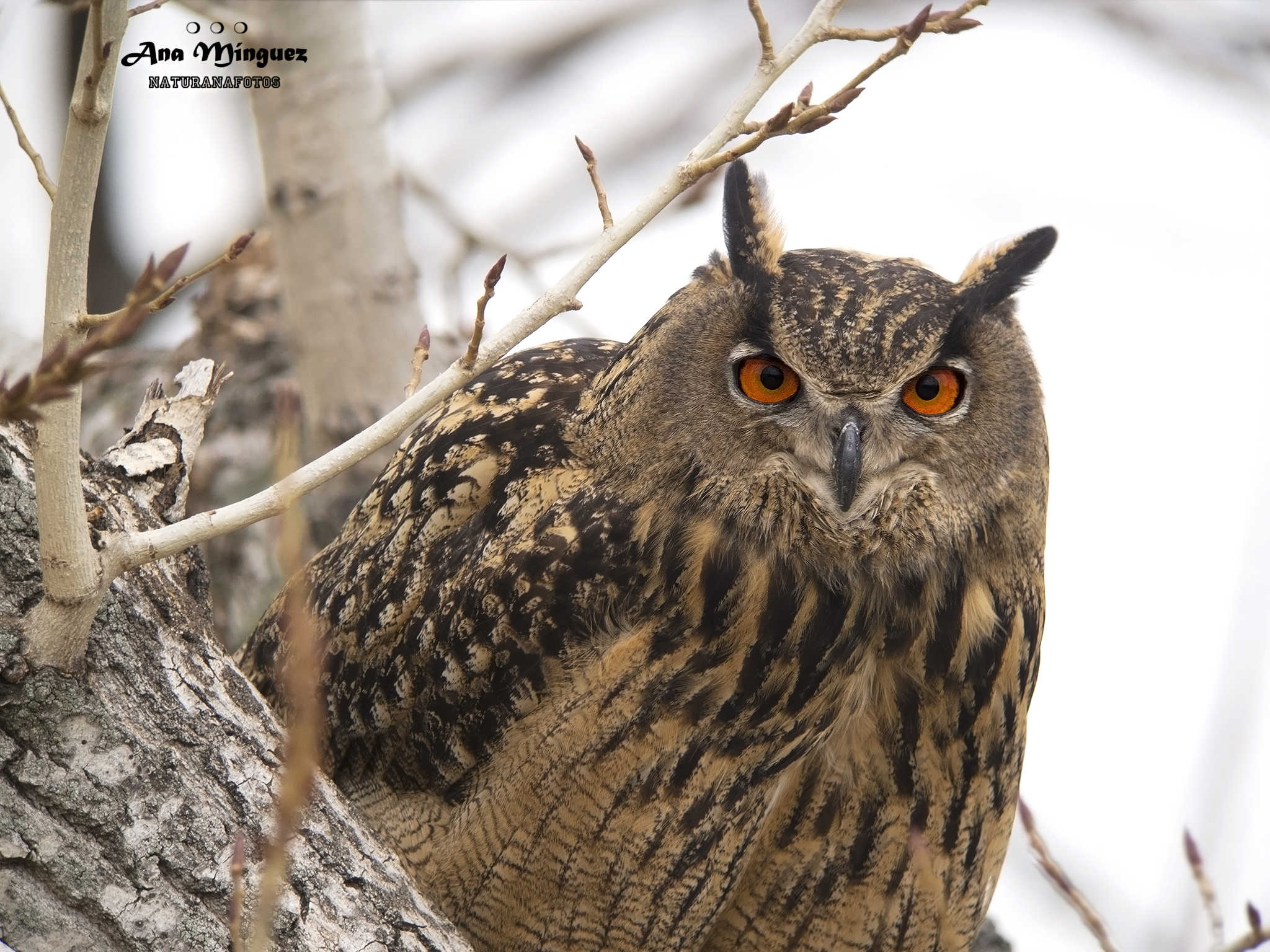 A Eurasian eagle-owl in the forest. Photography byAna Mínguez

It makes sense that the sound of nocturnal birds of prey may unsettle people who unexpectedly find themselves in nature after nightfall. After all, this unease springs from an irrepressible atavistic fear. But if you’re a nature lover, the same sound arouses great curiosity. Especially when we hear the largest of our nocturnal birds of prey: the eagle-owl.

The unmistakable call of the Eurasian eagle-owl, a deep, mournful bu-huuu, repetitive in its cadence and audible over great distances, is the signature sound of this majestic bird of prey as it lays claim to its territory on winter nights. Contrary to what many people assume, the eagle-owl can remain active during the day. In fact, it's quite common to start hearing its call in the afternoon, between February and March, long before the sun sets. 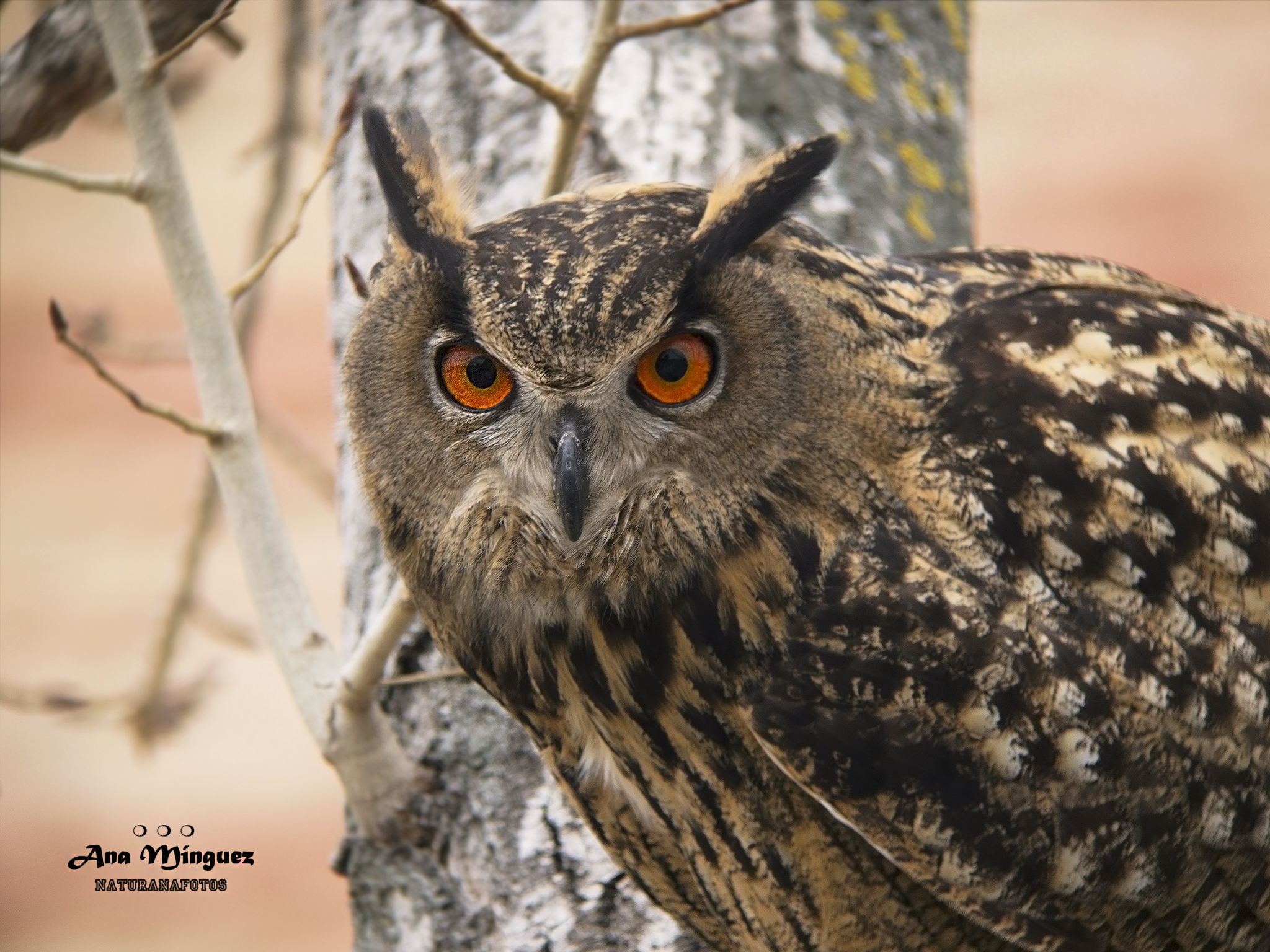 An eagle-owl perched on a tree trunk. Photography byAna Mínguez

Despite its large size, our protagonist is difficult to spot, even in bright daylight, because of its enigmatic plumage, which allows the eagle-owl to blend seamlessly into its surroundings. With its greyish brown, orange-speckled colouring, the eagle-owl has a lion-like pattern on the back and distinctive black stripes down its chest. Rising from its bulky rounded head are long plumes that, like feathered antennae, let the bird detect any movement that escapes the sharp vision of its large orange eyes.

In flight, the eagle-owl displays exaggeratedly wide rounded wings, which unfold like two silent sheets and carry the bird as it glides over its hunting grounds without so much as making a sound – imperceptible to its prey until it is too late. 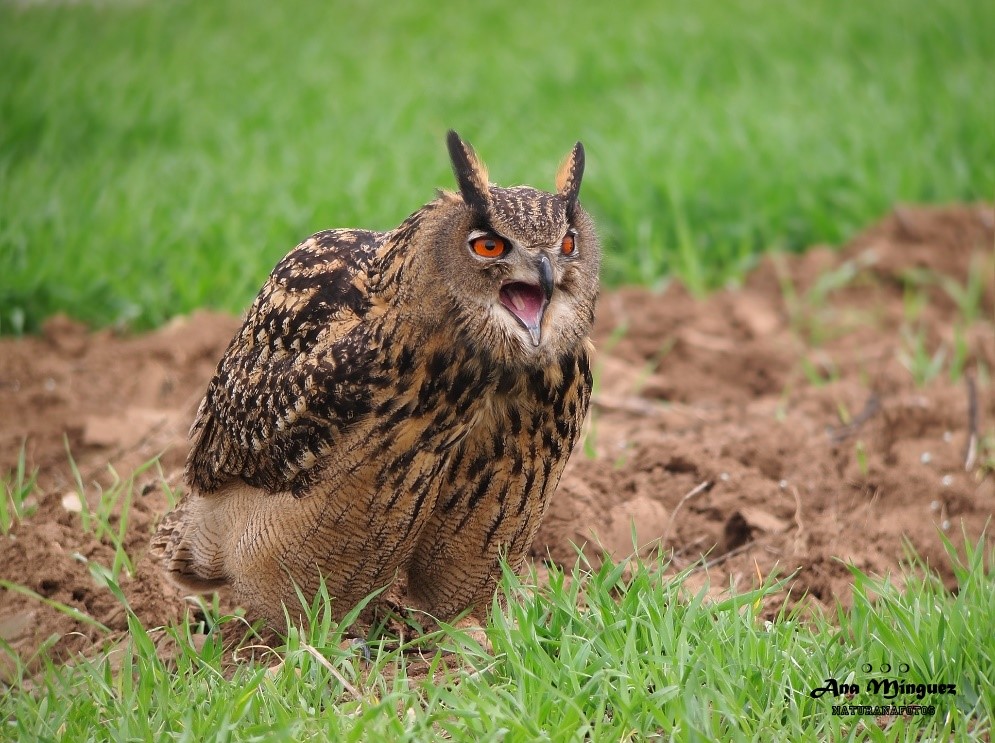 Although it mainly feeds on rabbits, the eagle-owl also hunts other small to medium-sized wild mammals, as well as all kinds of birds. After digesting its prey, the owl regurgitates the remains, producing what ornithologists call pellets. An accumulation of these pellets can help us identify areas the eagle-owl frequents.

Eagle-owls are highly regarded by farmers, because nocturnal birds of prey are among their finest natural allies. They keep the local rodent and rabbit populations under control, preventing them from becoming a pest, as exemplified by the voles which invade the crop fields of the Castilian plateau and whose worst enemy is this nocturnal predator. For these reasons, eagle-owls, tawny owls, scops owls, little owls, and barn owls are protected under the law and should be treated with respect.